Capillary action, also called capillary filling or wicking, means the spontaneous flow of liquid to fill small capillaries or pores. A famous example is that of capillary rise: when a glass capillary with a small diameter is placed in water, the level of water inside the capillary rises above the level of water outside the tube. This phenomenon is driven by surface tension forces which is why the smaller the capillary, the higher the water level will rise.

Capillary action does not only apply to water but is equally applicable to any liquid: 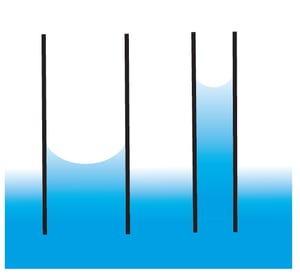 water, oils, organic solvents, biological fluids, etc. Capillary action has a major role in many natural, industrial and commercial processes. Examples of natural processes include the transport of water from the roots of trees to treetops and the movement of water in aquifers. Examples of industrial and commercial processes include oil extraction and lateral flow home diagnostic tests. In everyday life, the use of an absorbent kitchen towel to effectively clean liquid spills is based on capillary action.

Capillary filling is spontaneous when the free energy change is negative 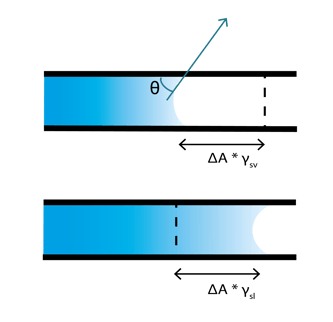 When a new section of a capillary is wetted, some amount of solid-vapor surface area (ΔA) is lost from the previously dry channel and simultaneously the same amount of new solid-liquid interfacial area is created. The free energy change (ΔE) associated with this is

To link the free energy change to the contact angle, we apply Young’s equation to get

For a hydrophilic surface, the contact angle θ is < 90° which means that the free energy change of wetting the capillary is negative i.e. the filling happens spontaneously.

Capillary action can also be understood in terms of capillary pressure. There’s a pressure difference, called the Laplace pressure, across all curved liquid interfaces caused by unbalanced forces between the liquid molecules at the interface. For the case of a pore with a circular cross-section (radius r) the capillary pressure is given by

With this information, it’s possible to predict how liquids will behave in applications, such as a lateral flow medical diagnostic test, based on the dimensions, the contact angle and the surface tension of a liquid. Such a test is used to analyze samples of e.g. blood or urine whose surface tensions are lower than water but still reasonably high. Therefore, the materials utilized in such tests need to be very hydrophilic for reliable capillary filling, for example, glass, hydrophilic paper or hydrophilized polymers. On the other hand, in applications where the liquid transported is e.g. ethanol (with much lower contact angle towards the polymer), even inherently hydrophobic polymers can be utilized.

Plasma treatment is an often-used process prior to coating, printing or gluing to improve the wettability of the material.

How to study the wettability of the contact lens?

Contact lens should support a continuous tear film for optimum visual clarity. It should also resist the sorption of tear components as deposition can lead to decreased visual clarity and discomfort. Wettability of the surface affects both the tear film as well as biocompatibility of the lens.

Wettability is the preference of a liquid to be in contact with a solid surrounded by another fluid (liquid or gas). Depending on the application, wettability can be wanted or not.

In industry, wettability is important for example when manufacturing electronics or when planning how to extract oil from the oil reservoir. In all these applications, knowing the contact angle value gives a strong indication on the performance of the product or a successfulness of the process.

Contact angle is easy to understand visually. It is the angle a droplet forms in contact with a solid surface. Thermodynamically, it is a balance between different forces acting on a three-phase contact point where solid, liquid and air meet.

With increasing understanding of the superhydrophobicity, the measurement methods to quantify the degree of hydrophobicity deserve some thought. 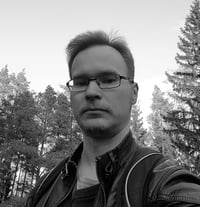 Ville Jokinen (Ph.D) is a lecturer at Aalto University, School of Chemical technology. His research interests are microfabrication, wetting, microfluidics and superhydrophobicity and their chemical and biological applications.