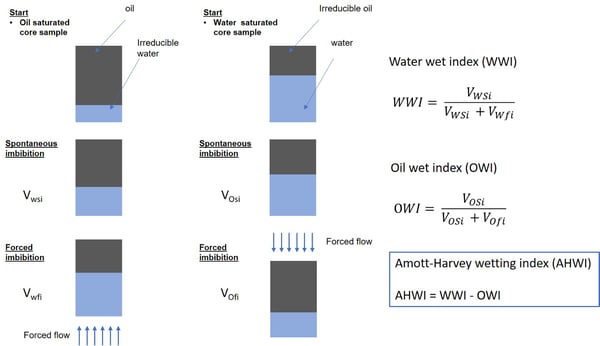 Prior to measurements, the preparation of the core sample is done so that it is in irreducible water saturation, i.e. at the lowest water saturation possible to achieve. In the first measurement step the core is placed into the water-filled tube and the spontaneous imbibition of water over a period of time, at least 10 days, is measured. Then, the core is placed in a flow cell and water is forced through the sample. The additional oil recovery is recorded. Now the sample is in residual oil saturation point meaning the state where, as much oil is recovered as possible with water. Next, the process is repeated so that the spontaneous imbibition of oil is measured followed by the forced flow.

The result is the Amott-Harvey index which is a difference between the water and oil ratios and varies from + 1 (strongly water-wet) to – 1 (strongly oil-wet).

The USBM test was developed by Donaldson in 1969. As Amott – Harvey test, it measures the average wettability of the core. The USBM test compares the amount of work required to replace one fluid with the other. The method is based on forced imbibition of fluid inside the core which is achieved by centrifuge spins with stepwise-increasing speed.

As The Amott-Harvey methods, The USBM starts with the irreducible water saturated core inside a water-filled tube. After periods at several spin rates, the sample reaches residual oil saturation, and it is placed in an oil-filled tube for other series of measurements. The produced curve is similar to Amott-Harvey, but now the areas between each of the capillary-pressure curves and the zero capillary -pressure line are calculated. The logarithm of the ratio of the water -increasing to oil-increasing areas give the USBM wettability index. The practical measurement results are typically in a range of +1 (strongly water-wet) to + 1 (strongly oil – wet). The USMB method is faster than Amott-Harvey since the spontaneous imbibition is not done but must be corrected because the centrifuge induces a nonlinear capillary-pressure gradient in the sample.

The sessile drop contact angle measurements offer a simple method to study reservoir wettability. One of the advantages of the method is also that it can be conducted at elevated temperatures and high pressures which mimics the reservoir conditions. It can also be used to study the effect of other experimental conditions such as brine chemistry on wettability.

In practice, a drop of liquid, typically crude oil, is placed on a core sample surrounded by brine. As contact angle is commonly presented as a drop of heavier liquid in lighter phase (eq. water in air or water in oil), the contact angle ranges for water-wet, intermediate – wet and oil – wet are as presented in figure below.

If you would like to read more about wettability measurement techniques for oil reservoirs and how they can be utilized in enhanced oil recovery optimization, please download the white paper below.

Studies show the influence of EOR agents on the reservoir rock wettability. Studies are not considering the reservoir conditions i.e. high pressure.

Using so-called smart water flooding has increased interest in both sandstone and carbonate reservoirs due to its low cost and minimum impact on the environment.

How to alter wettability in carbonate reservoir?

Carbonate reservoirs are characterized as intermediate to oil- wet. Altering the wettability of the carbonates has been proposed as one of the main mechanisms for enhanced oil recovery.

3 examples of how to utilize high pressure tensiometer 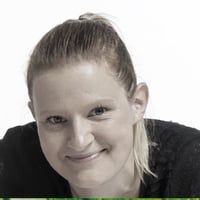