Quantifying QCM mass, there are two different approaches to choose from depending on whether the layer is rigid of soft - the Sauerbrey equation or viscoelastic modeling. But what if the wrong model is applied, what happens then? How critical are the consequences? Here we describe what happens if the wrong quantification approach is used.

Using Sauerbrey when viscoelastic modeling should be applied

As can also be observed in Fig. 1, none of the calculated Sauerbrey masses are close to the viscoelastic modeled one, they are all underestimated. This means that for soft layers, the Sauerbrey approach cannot even be used to get an estimation of the mass.

Consequences of using the Sauerbrey equation on a soft layer 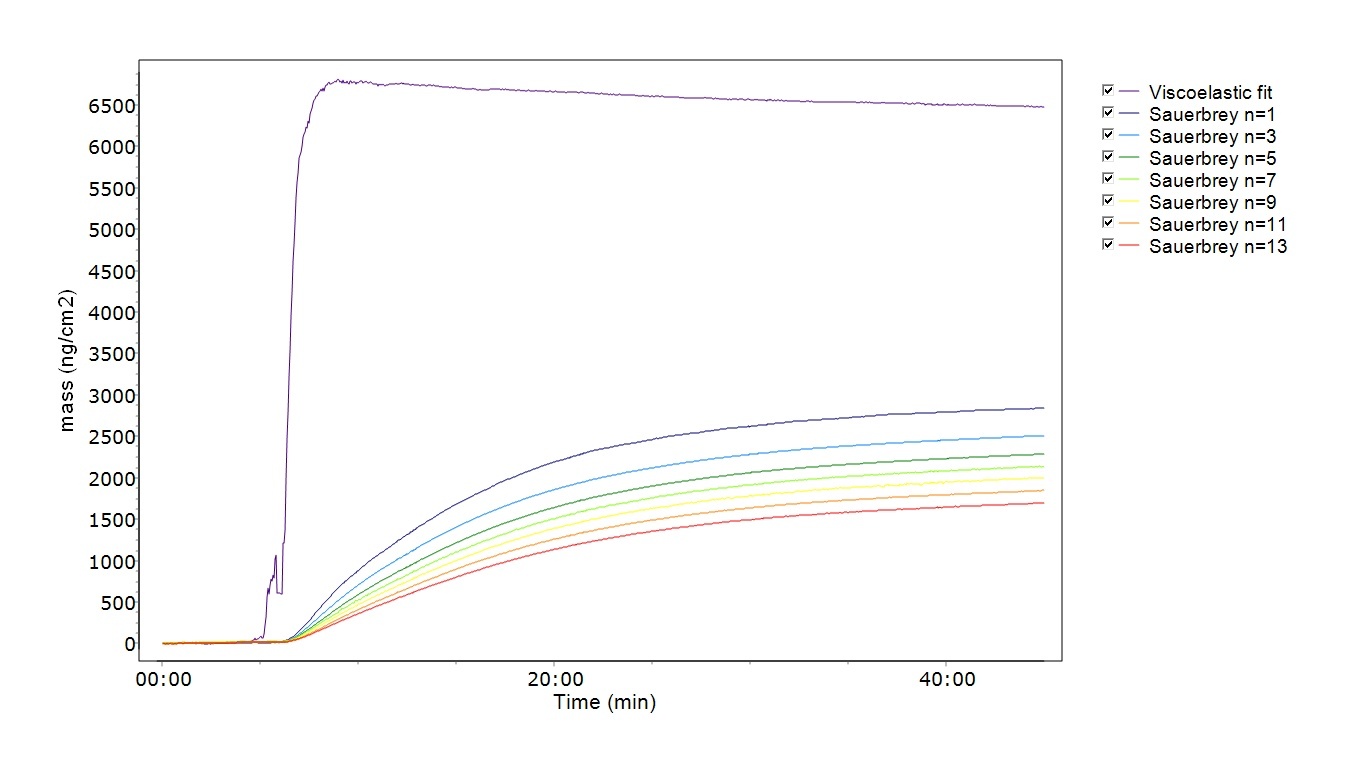 Using viscoelastic modeling when the Sauerbrey approach should be applied

Using viscoelastic modeling on a rigid layer is less severe than the other way around. In this situation, the biggest problem will be for the modeling software to find a good fit. To model the QCM-D data, unique input from at least two harmonics is needed, and since the overtones are overlapping for rigid films, they will not provide enough unique information to use as input in the model. The consequence can sometimes, therefore, be that the software will not succeed in finding a solution. If it does, the modelled viscosity and shear values may be random.

Consequences of using viscoelastic modeling on a rigid layer

If the layer to be analyzed fulfills the modeling requirements, there are two approaches that can be used depending on whether the layer is rigid or soft. Applying the rigid layer approach on a soft layer will give the wrong result and is more severe than the other way around where the main consequence is that it can be difficult to find a good fit.

Download the guide to get a summary on how to assess which analysis method to use.

Here we describe what makes QCM-D particularly suitable for this kind of analysis and show what a typical measurement can look like.

Here we describe what information you can extract from QCM-D, Quartz Crystal Microbalance with Dissipation monitoring technology.

Biomolecular interactions - how to characterize with QCM-D

Learn more about how biomo­lecular interactions can be analyzed using QSense® QCM-D technology and what information QCM-D measurements offer.

Get on top of the key facts and fundamentals of the lipid bilayer formation process with our selected list of 8 publications.