A balance for very small and soft masses

QCM-D is an abbreviation of Quartz Crystal Microbalance with Dissipation monitoring. The technology is essentially a balance for very small masses. The QCM-D is an extension of the QCM, a technique that has been used since the 60’s to measure mass changes on surfaces in the vacuum and gas phases. The QCM technology can measure mass uptake and mass loss at the sensor surface in real-time, Fig. 1, and is thus ideally suited to monitoring the film buildup rate and thickness during thin film deposition of, for example, electronic semiconductor devices and optical coatings.

Figure 1. Schematic illustration of the QCM-D working principle and the measurement of mass uptake at the surface.

Different QCMs are suitable for different kinds of films

The films deposited in the vacuum or gas phases are typically very thin and rigid. This makes them ideal to study with the QCM, which relates the measured output parameter, in this case the resonance frequency change, directly to the mass added or removed from the sensor surface via a linear equation. In other media, such as liquids, or for other types of layers that are softer, such as the addition of biomolecules, the standard QCM is not as suitable due to limitations in the measurement principle related to the film behavior. The QCM-D however, which is an extended version of the QCM, is particularly suitable for the characterization of soft layers. Due to the measurement of additional information, the mass and thickness changes of soft layers can also be quantified.

What types of layers are soft?

Soft layers typically constitute biomolecules, polymers, soils such as, for example, grease, or any other type of material that does not behave like a solid. Also, layers that are composed of “hard” molecules which are solvated or hydrated can behave similarly to a soft film on a macroscale, even though the molecule itself is rigid. One such example would be cellulose fibers, which in a dry state behave as a rigid layer on the surface, but when exposed to water will swell and create a hydrated soft layer.

Probing the transitions between rigid and soft layers

So far, we have discussed how QCM-D is suitable for characterizing the mass and thickness of soft layers. This information is relevant to surface interaction analysis both in terms of “yes/no” answers as well as the characterization of quantities. Questions like “How much material is adsorbing to the surface?” or “How much is leaving?” and “How fast is the process?” can be answered. With the QCM-D it is also possible to measure the softness of the film. This information allows for analysis of how the molecules arrange themselves at the surface when they adsorb. Whether they form a dense packing or arrange themselves more sparsely. Whether they lie down at the surface or stretch out. Since the softness is measured as a function of time, it is possible to detect and follow structural changes to the molecules when immobilized, such as swelling processes or crosslinking processes, Figure 2. 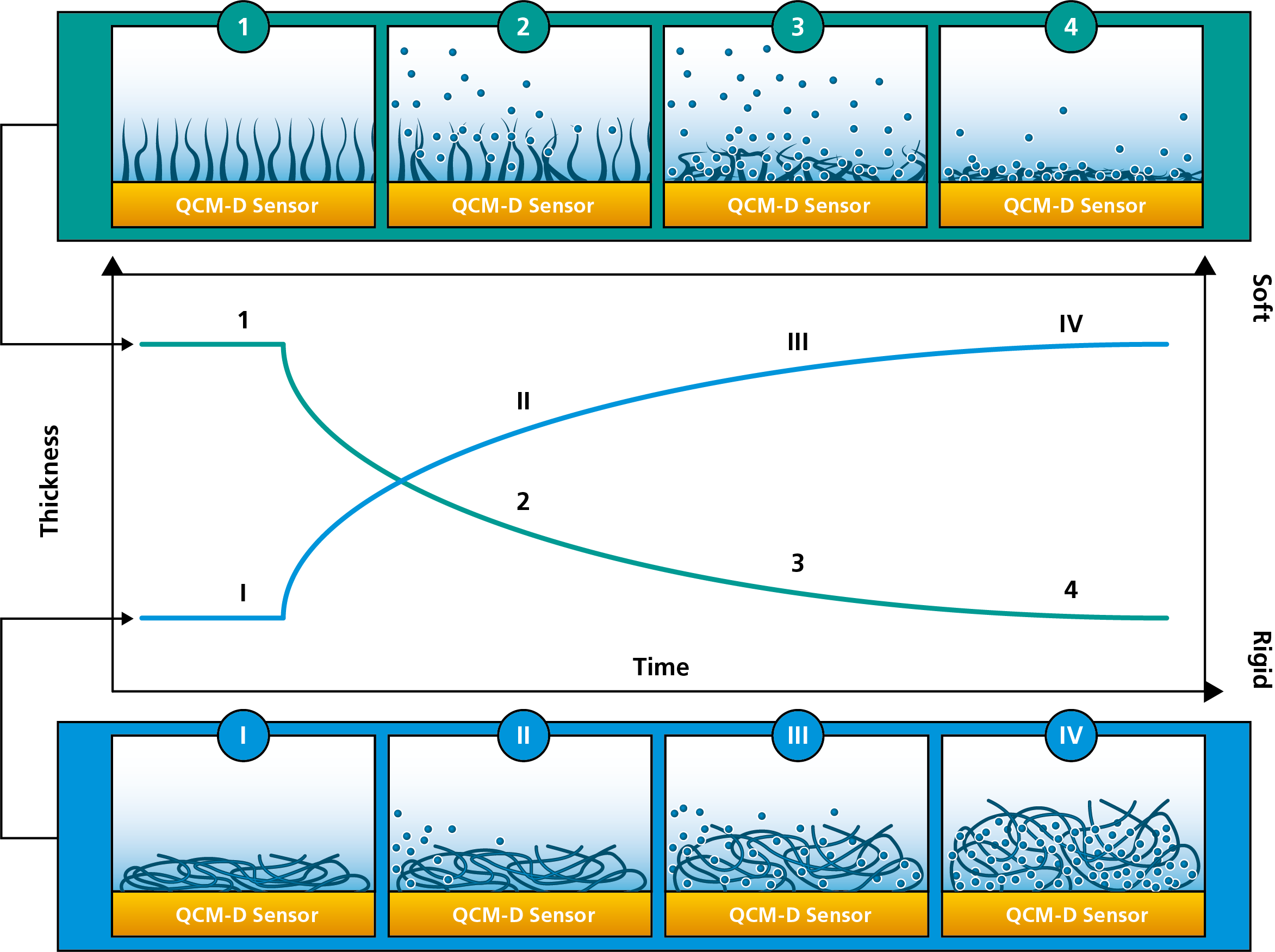 Download our overview to read more about what information you can extract from QCM-D data.