It is probably safe to say that the aim of any QCM measurement is to study and evaluate surface interaction phenomena of some sort. The interaction is measured using the resonance frequency, and preferably also dissipation, responses, that provide info on mass and structural changes.  However, in addition to the mass and structural changes intended to study, there are other factors that also influence the QCM signals. One major such factor is temperature. Insufficient temperature stability during the measurement will, therefore, introduce temperature related artifacts in the data, and in the end, it will not be possible to determine how much of the measured signals that originate from temperature changes and how much that originates from the surface interaction under study.

There are three main sources of temperature induced effects commonly observed. A change in temperature will change:

QCM technology is sensitive to changes of the bulk solution properties. The viscosity and density of most liquids are both temperature dependent, and if these properties change they will directly affect the measured resonant and dissipation readings.

3) Changes of the mounting stresses

Mounting stresses of the sensor, induced by for example O-rings and contacts, will always be more or less present. The resonant frequency is influenced by these stresses, and any changes of the stresses will consequently induce changes in f and D. Changes in temperature may for example change both the diameter and elastic properties of the O-rings as well as the dimensions of the measurement chamber (by tiny amounts, but still). Temperature variations may, therefore, result in mounting stress-induced artifacts in the measured responses. For small T-variations, this is not likely to happen, and it is therefore considered to be less of a problem than factors 1) and 2). If it does happen though, it is quite severe. And unlike the other two factors, this artifact is not reversible.

Overall, the induced artifacts will manifest themselves differently depending on the nature and origin of the T-variation. For example, depending on whether the changes are fast or slow, and if they come from the sample or the ambient. Temperature variations induced via the sample may happen for example if you are measuring at room temperature and then use a cold sample directly from the fridge. Essentially, such a T-change will result in signal spikes. The spikes may be of a large magnitude, but typically they will disappear as the sample temperature equilibrates and returns to the previous value. Variations of the ambient temperature, on the other hand, will generate long-term changes of the signals and result in what is perceived as a drifting baseline. Temperature-induced changes of the mounting stresses can be a result of both sample and ambient T-variations. They typically manifest themselves as a jump or step-like signal change, which never returns to the previous baseline.

How large will the temperature induced artifacts be?

So what distortion magnitudes are we talking about? The extent of the temperature related artifacts depends on several factors, such as if you are measuring in liquid or in air, what liquid you are using, the temperature at which you are running your measurement, and of course the magnitude and duration of the temperature fluctuation. A temperature induced artifact originating in any of the three root causes could be several Hz per degree, Fig 1. Therefore, to reach reliable measurements with sub-Hz sensitivity, it is necessary to have a long-term temperature stability at a level of hundredths of a degree. 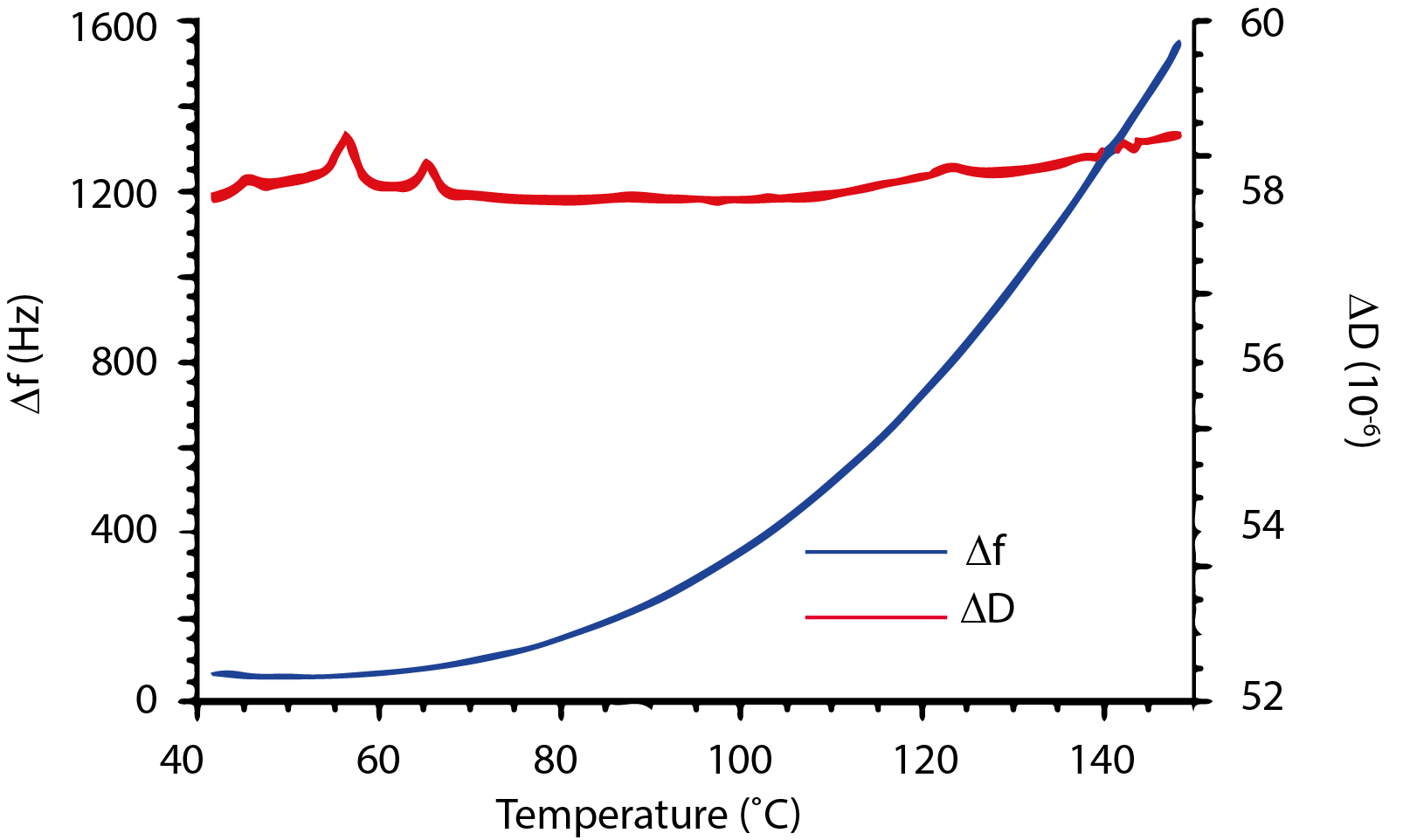 Figure 1. Example of frequency and dissipation as a function of measurement temperature. The sensor is coated with a thin polystyrene film, and the measurement is captured in air in the T range 40 – 150 °C. In this case, since the bulk fluid is a gas, the main temperature effect comes from the temperature dependence of the sensor’s resonant frequency. The small jumps in the dissipation reading are due to so-called activity dips but are outside the scope of this post.

Download the overview to learn more why temperature stability is critical and how to avoid temperature related problems.